A modernist sanctuary that overlooks the Trancoso jungle – NY Times 2019 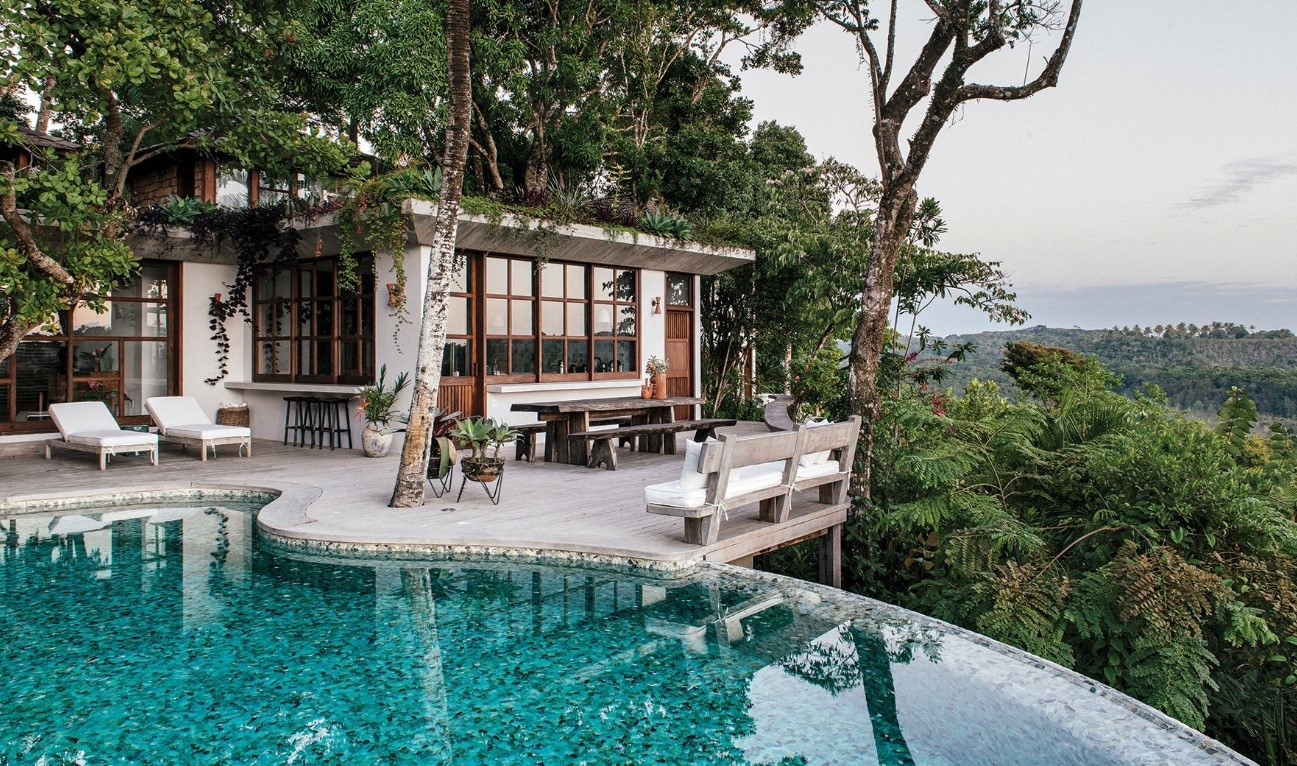 A Modernist Sanctuary That Overlooks the Trancoso Jungle

THE DUTCH DESIGNER Wilbert Das first visited the Brazilian beach town of Trancoso in 2004 on a whim after hearing about it from a friend in the Italian province of Vicenza, where he’d moved in 1988 at the age of 24 and eventually became the creative director of what was then a fledgling denim line called Diesel. Das’s friend had raved about Trancoso’s unassuming glamour, its 17th-century bone-white chapel that fronted the electric blue Atlantic and the fishermen’s houses in Easter-egg hues that line its grassy main square, the Quadrado. Das, now 55, went in June — “the lowest of the low season” — and left completely enchanted: “I’d never been any place like it.” A town of 11,000 people, Trancoso had neither electricity nor running water until the early 1980s, shortly after the first hippies, fleeing Brazil’s military regime, started migrating from São Paulo, 870 miles to the south. Even today, Trancoso seems not so much frozen in time as indifferent to it.

By 2006, Das and his partner, Bob Shevlin, now 51 (who also worked at Diesel, as a new-media manager), were regular visitors, eventually buying a house on the Quadrado, its garden overgrown with banana trees and stalks of heliconia. A few years after that, they opened a hotel named Uxua, its 12 guesthouses decorated in what would become Das’s signature Trancoso style: a flamboyant collector’s eclecticism combined with an unsentimental love for regional craft and vernacular structures. Throughout the hotel, locally woven rattan lamps cast dappled light over antique furniture scavenged from defunct cacao and dairy haciendas. Throw pillows hand-painted with the complex geometric designs of the indigenous Pataxó community form molehills on four-poster beds draped with finely woven mosquito nets. “In fashion, I was the bad guy, making these mass-market products; all of this is a reaction to my previous life,” Das says. It didn’t take long before visitors, as beguiled by Trancoso’s languid charm as by Das’s interpretation of it, started asking him to design houses for them.

When a Belgian media magnate — an Uxua regular — approached Das in 2015 to create Casa Cajueiro, a six-bedroom vacation home near the town’s historic center facing the jungle and named for the cashew tree growing in the middle of its six-acre plot, she gave the designer creative carte blanche. After his first site visit, Das drew blueprints for a 12,000-square-foot home based on a disjointed floor plan that would preserve 14 of the property’s mature mango, star fruit, cinnamon, jackfruit and almescar trees. Five white stucco suites and one of reclaimed wood, each a hermetic world of its own, branch out from a shared block of common spaces that torques around the central tree, offering expansive views to the ocean.

ORIGINALLY FROM RURAL Holland, Das grew Diesel from a company of 50 people to an international brand with 5,000 employees. “My specialty was always materials that have a life,” Das says. While selling jeans, that meant creating the illusion of history by distressing mass-produced denim. In his Trancoso projects — including his own home, Uxua and a four-cottage property built for the newscaster Anderson Cooper — he filled the rooms with objects marked by age: He furnished Cooper’s house with a coffee table made from a whale vertebra bought for $100 from a fisherman on the beach, a bed made from the giant wooden screws of an old cassava press and faucets and light fixtures made from copper piping purchased at a nearby hardware store — a detail, he says with pride, that now turns up in other designers’ projects all over town. Following this commission, Das introduced his own line of Uxua furniture, much of which makes use of local wood.

At Casa Cajueiro, Das decided to explore the Brazilian Modernist tradition that had been refined throughout the 20th century by both local designers and their counterparts from abroad, who, like him, had found their way to the country and decided to stay. What would Modernism look like, he wondered, if it had been invented in Trancoso? While the detached bedrooms, with their pitched roofs shingled in rust-red parajú wood, resemble the local fishing cottages, the core of the house, with its long swath of floor-to-ceiling windows under a flat concrete roof, reflects the classic midcentury homes of São Paulo. Inside, Das focused on crafts and techniques that reveal the human hand while referencing Modernism’s obsession with the machine age. In the kitchen, for instance, the designer covered one wall in pressed concrete tiles in 30 permutations of grays, blues and greens, their tonal variations the result of hand-mixing pigments. Throughout the home, ceramic pendants glazed in shades of lavender and sage mimic the tiered 20th-century designs of the Danish lighting manufacturer Louis Poulsen, with component pieces strung like beads on iron rods; Das imported the pigments from Nove, a town known for terra cotta, not far from Vicenza — “a really nice cross-contamination of cultures,” he says.

Then there’s the main 485-square-foot living room, which reads like a history of Brazil told in objects. A pair of modish sling-back chairs by an anonymous 1960s designer from São Paulo flank a coffee table made from slices of pequi and jackfruit woods, each piece painted with geometric patterns by the same Pataxó artist whose work appears throughout Das’s hotel. For the adjacent dining room, Das commissioned a local carpenter to build a monolithic table from thick slices of jackfruit wood, joining them to resemble the cross section of a single prehistoric tree. Circling the table are three-legged chairs, their backs slim as broomsticks, made from Brazilian cumaru, freijo and brauna woods; these pieces are Das’s reimagining of the iconic 1980s Giraffe chair by the Italian-born Brazilian architect Lina Bo Bardi, whose buildings — such as the Museu de Arte de São Paulo and the city’s SESC Pompeia, a community center housed partially in a former factory — played a fundamental role in shaping the cityscape of Brazil’s largest metropolis.

Bo Bardi, one of Das’s heroes, was just one among a generation of artists, architects and artisans who fled the violence of World War II and found themselves in Brazil; optimistic and outward-looking, the country represented an escape from European parochialism. Here, the designers broke from the dogma of the International Style, with its insistence on spare volumes untainted by ornament or color, to create a truly regional Modernism.

Works from this cohort populate Casa Cajueiro like ghosts: On the covered path that leads to the children’s suite is a pair of angular chairs made in the early 1950s from metal tubing and wooden slats by the Italian designer Carlo Hauner that face a hanging daybed fashioned by Das from knotted naval rope; candy-colored tapestries of big-beaked birds and flora woven in the 1970s by the Chilean artist Kennedy Bahia hang in the master suite, just a few feet from the Romanian-born Brazilian furniture designer Jean Gillon’s 1960s Jangada chair — a wooden frame hung with hammock-like netting and thick leather cushions — that fronts a deep, shaded veranda. From here, the ocean seems suddenly far away, the view to the east framed by the lush tropical canopy. There are no towers on the horizon, no resorts, no cliffside mansions reflecting the sun. Even the rest of Casa Cajueiro disappears into the jungle: just another new arrival, entirely at home.