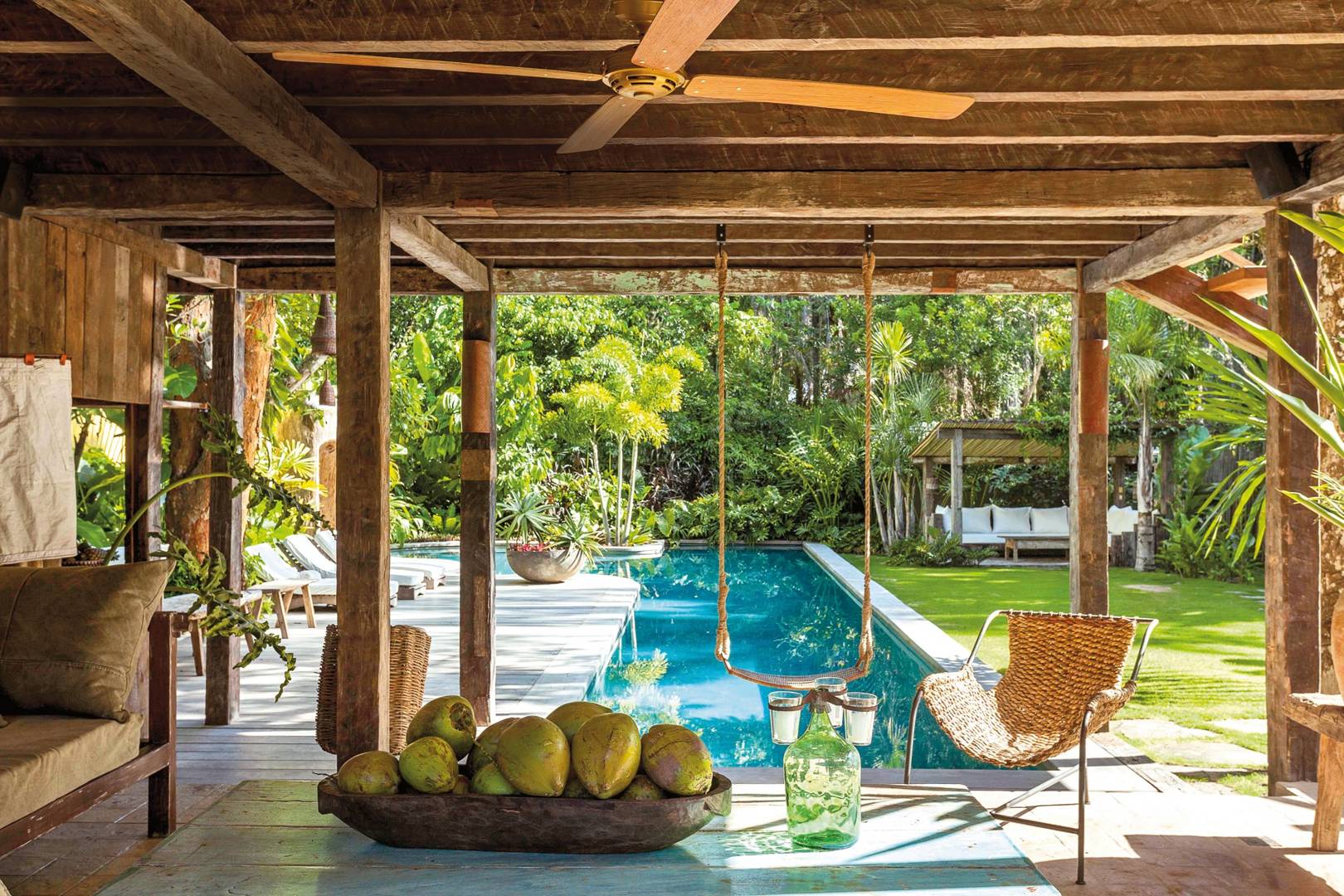 How to rent the coolest beach house in Brazil - head to Trancoso, Brazil's coolest beach town, where TV anchor Anderson Cooper has the most beautiful hideaway which can now be taken over for a newsworthy story all of your own.

The sky momentarily darkens and the rain starts to fall, pinging into the jade pool and sliding down waxy leaves. I lie among a cache of cushions, my book abandoned beside me, and watch as the sun quickly reappears, thickening the moisture in the air. Jagged reflections cut shapes onto the water's surface, birds come out again and the balmy Bahian sky reveals itself once more.

The view from the master bedroom at Casa Anderson is one that you could wonder at indefinitely without ever venturing out. So it is no surprise that since its completion, owner Anderson Cooper, a lead anchor for CNN, rarely makes it to the beach, favouring instead the tranquil seclusion of his new Brazilian home in Trancoso. The sense of this place is close at hand, however. Cooper's front gate opens onto the Quadrado, which serves as the village green. At one end is a white church dating from the 1500s and lining the perimeter are fishermen's houses painted pinks and purples. The odd market stall under the trees sells chocolate, handmade jewellery and dreamcatchers, and local life plays out in the middle, often between the football posts.

The bucolic backdrop is the ultimate antidote to many of the unpredictable situations Cooper encounters while working; for years he has reported regularly from war zones. The son of American artist and heiress Gloria Vanderbilt, he is a familiar face on screen, and this pocket of Brazil is a perfect hideaway.

'The first time I came to Trancoso I stepped out onto the Quadrado and fell in love with the place,' he says. 'It's a real community: you know your neighbours; you see their kids playing football in the fading light of day; you hear bossa nova drifting from a family-run restaurant nearby. There really is no place like it in the world.' Cooper is not alone in this view. Beyoncé has visited more than once, her sister Solange honeymooned here, Florence Welch stopped by for some downtime, and top models and international DJs regularly come to see in New Year and join the party during carnival. Yet life here remains so stubbornly laidback and low-key that even those who come to escape the paparazzi end up revealing their whereabouts on Instagram. In many ways, the hoteliers Wilbert Das and Bob Shevlin are the ones to thank for preserving the town's character. In the eight years since they started their boutique hotel Uxua Casa, the pair have become custodians of the Quadrado, linchpins of the community and figureheads of a certain brand of high-end, low-impact hospitality. Das, who was formerly creative director of fashion brand Diesel, is responsible for the hotel's understated rustic-luxe look and he also took on the design of his friend Cooper's new home.

'Wilbert has such great taste and knows all the finest craftsmen in Trancoso,' says Cooper. Both men agreed they wanted to create a house that looked and felt like it had always been here. And since Das's sought-after style relies almost completely on natural materials, woodwork and recycled bits and pieces, it was decided that Casa Anderson's design would tell a story of the area.

The property is made up of four separate buildings. The first, closest to the Quadrado, has a kitchen and large, airy living space. Then stretching back towards the jungle are three suites, or casas, inspired by local building styles. The first is a traditional colonial-type house found in Trancoso and nearby towns. The second is made of clay and eucalyptus using a technique known as pau a pique, which is typical of favela housing. In the final casa, the master suite is raised on wooden stilts like a beachside fisherman's hut. It was built mostly out of the warm, weathered timber of an old fazenda, or farm, which Das bought up before it was demolished. Much of it is roxinho, a now protected Brazilian hardwood. Rub water into it and its rich, purple hue shines through. Offcuts pave the floor of the pergola, and faded eau de Nil patina-effect timbers from the same building form the ceiling in the second casa.

The look is a pared-back palette of blues and greens and whites. There are salvaged ships' lanterns and lampshades made of waxy canvas and rustic ceramics. Dark clay basins sit below copper taps and mirrors with pistachio or iris-blue frames.

Smart quirks abound. In one casa the bed is backed by the tailgate of an old truck; another has a bedhead with six flippable panels to change it from a king to twins, and so on. A beautiful whalebone table Das bought from a fisherman at a barbecue lives in the master suite, and in the dining room small backlit religious oratories adorn the wall. There are two televisions in the property but they're well hidden - in a trunk and behind a faded Brazilian flag: perhaps no surprise for a man who gets enough screentime in his day job. Instead he would rather gaze at old maps of the area that hang throughout the house. He spent months scouring eBay for them. 'One is of Brazil from the 1950s and is typical of the kind you'd have found in a French school,' he says. 'I love the history of this country and these maps really give a sense of the past.' He continues to bring antiques to the house, adding more with each visit.

The grounds are equally special. 'We have an incredible variety of palm trees and orchids,' says Cooper. There are also seven types of banana, açaí and cacao. 'You can spend the whole day watching the birds that have built nests in the trees. We even have a family of small white-faced monkeys who visit.'

On the decking there are sunbeds, a bar and a shower inside a huge hollow pequi tree trunk. The 20-metre teal-coloured pool is for doing lengths and lolling around in, and the overhanging swing encourages child's play. Cleverly, the deep end was positioned closest to the house for daring plunges off the balcony above.

'Just knowing the house exists makes me happy,' says Cooper. 'If you are looking for somewhere with fancy nightclubs with velvet ropes, Trancoso is not for you. But if you want a more authentic experience, a place where your most difficult decision will be whether to take a stroll along the beach or around the Quadrado, then this is definitely the place.'

Casa Anderson is available to rent from £1,330 per night including breakfast.