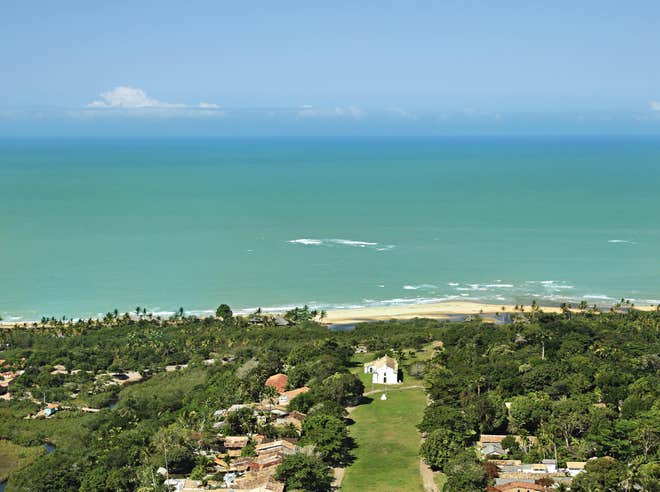 Trancoso, in Bahia province, was cut off from the rest of Brazil until the 1970s. But then the hippies arrived. Georgina Wilson-Powell reports

It’s not easy in 2017 to find places that feel more magical than mass market. The originally hippie heavens of Goa, Thailand and Bali are overrun with smoothie-slurping yoga nuts or digital nomads trying to launch an IPO-worthy company. Trancoso feels like discovering Goa in the 1960s – a secret to be whispered round a fire and drawn on an old-school map.

Shevlin has lived here on and off for 13 years. On the outside (because everywhere beyond the town’s “quadrado”, or square, feels like a different world from Trancoso), he’s a successful businessman, co-owner of the town’s trendy Uxua hotel. But here in his natural habitat – dressed in harem pants, with long hair, Amazonian beaded bracelets and upcycled jewellery made of pigs’ tusks – you might mistake him for a hippie who never went home. In one of the poshest restaurants in town, neither the outfit nor his cultured chat about art collections in Italy merits a second glance.

Most tourists to Brazil blindly head for Rio, forgetting this enormous country has over 4,000 miles of coastline. Bahia, perhaps its most laidback state, is home to the “Discovery Coast”, where Trancoso sits on Unesco-protected shores. Porto Seguro (an hour away and the nearest airport) is where the earliest Portuguese explorers first set foot on Brazilian soil in 1500.

Backed by thick jungle on three sides, ocean on the fourth, Trancoso has developed separately from the rest of the world. Time – and, to some extent money – counts for little, here. There’s little distinction between the days; people amble between the beach, the grassy rectangle of the quadrado and their hammock. The brightly coloured shops and restaurants that line the two long sides of the square open up for business at the end of the afternoon, and as darkness falls, the only illumination comes from the lights strung between the trees like a festival in a far-flung field.

After a couple of days, even the other side of the quadrado seems too far to stagger for a caipirinha. Kids swing from the smaller trees, half-naked and happy with no parents in sight while the village elders congregate around a smooth-with-age communal table that sits under the biggest tree – this “Table of the Old” is the slow, steady beating life force of Trancoso’s soul.

In Trancoso, people earnestly discuss concepts like their soul and the ever after. Cynicism seems to evaporate in the warm air – within days your shoulders drop, your heart rate slows and you start planning a permanent move. The attitude isn’t unusual for Brazil, of course; but what is different is that the people you’re having deep and meaningfuls with are as likely to be billionaires as bums and gap year kids.

Where it also differs from other parts of Brazil is that Trancoso is a town untouched by the gaudy ritual of Carnival. Instead, they celebrate saint’s day São Brás (St Blaise) on 2 February with a 36-hour party that includes drunken 5am processions, the raising of a painted pole (on which women are invited to sit to encourage fertility) and a hypnotic song that’s repeated for the entire day and a half. It emanates like a rumble from the Table of the Old until the entire town gathers and proceeds to the Casa de Festa, the “party house”, carrying the beat like an ember that must not be allowed to die.

A blend of Catholic and African influences, the ritual includes mass in the white church at the end of the quadrado, sacrifices in the sea to appease the sea goddess Iemanja, and a village party complete with rock band and food stands.

This embrace of differing traditions is what makes Trancoso so special. When the hippies discovered the town in the 1970s, it was off the beaten track, literally – there were no roads here, and no electricity. They arrived, bringing macrobiotic cafes, yoga and free love; and the Bahian locals simply shrugged and welcomed them in.

Uxua, Shevlin’s hotel that’s arguably put Trancoso on the map among the hip global elite, is partly housed in some of the fishermen’s casas that Wilbert Das, (ex-creative director of Diesel) bought from the original wave of hippies. Over the last six years, he’s created a jungle paradise that regularly welcomes Victoria’s Secret models and Oscar-winning actors into the cottages that form its rooms. But unlike the luxury hotels of Rio and São Paulo where they’re feted upon entrance, here in Trancoso they’re treated no differently to you or me. The hotel’s success has made Das money, of course, but he’s also brought traditional building and craft skills back to Trancoso, supports local artisans and funds hospitality initiatives and capoeira schools.

So what’s there to do in Trancoso? Thanks to the upmarket-yet-under-the-radar guests, the shops leading off the quadrado are as likely to house Brazil’s coolest fashion designers as they are flat whites (minimalist furniture designer James, for example, has just moved its store from Paris to Trancoso). There’s horse-riding on the beach, and cooking lessons, yoga classes or jungle excursions. But really this is all missing the point. Trancoso’s at it’s best when there’s no plan. Ditch the shoes and smartphone, drag your soul from where it’s been cowering, and just turn up, tune in and drop out.